I got an email from a user who was confused about what the spoke angle measurements were, and while I was looking into it I found and corrected an error in the measurements (it happened when the spokes rotated all the way around the hub, something that would never be laced in the real world).

However, I realize the wording I used doesn’t distinguish the terms well. I’d love for some input on how to better describe them, but here’s some pictures to illustrate the issue:

Spoke Angles perpendicular to Rim - Imagine a radial spoke being 0 degrees (you can see this number go to zero if you select Radial). This measurement is how ‘off Radial’ the spoke is, while looking at the side of the wheel like in the display on the page. 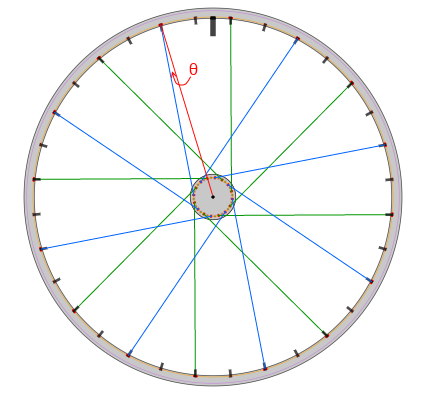 Spoke Angles toward Axle - This would be the angle if you were to look at the wheel edge on, imagining a line from the spoke eyelet straight across the rim, and will increase as the hub gets wider, and decrease as the hub gets thinner. The only way this would be zero is if the wheel were laced in such a way that the hub flange were perfectly in the middle of the rim, which doesn’t happen with spokes (though in theory, Spin wheels would have a zero degree angle here).
Here’s a picture: